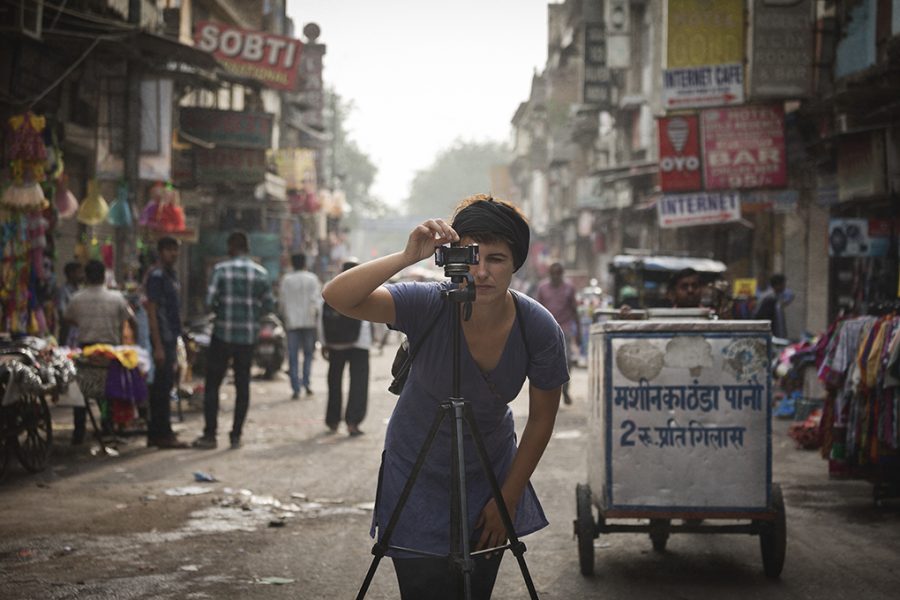 Degree in Visual Communication. My fascination for photography started during the years I worked in the local newspaper Hernaniko Kronika (2003-2009), where I got in touch with photographic cameras.

In 2009 I attended a pinhole photography workshop and I inmediately understood that this primitive way of taking photographs was the perfect means of expressing myself. I liked the idea of being able to build cameras out of any container, therefore having the possibility of going beyond the standard photographic formats. I also liked the dreamlike and inaccurate images that this means produces.
In the Spring of 2011, the editing house Banizu Nizuke published my first book, EDIPOTOA, where my first pinhole photographs were featured.

Nowadays, I combine teaching photography -both pinhole and digital- with the research and development of photographic projects.

In 2014 I started working on a project called HYSTERON, in which I took pictures using a 5 kg. tuna can and a cooking pot, both with several holes. I photographied women’s naked bodies against a black background. The cans merged some parts of the bodies with others, creating a feeling of tension between them. This work was released in 2015 and has made its way:

-Koldo Mitxelena Cultural Centre in San Sebastián, with the support of  the European Cultural Capital event, 2016.

-The art space Le Bel Ordinaire of Pau has selected two pieces of this work that will be exhibited as the culminating activity of a research focused on women. Pau, 2018.

-´Etxelila. Emakumin Topaleku´ (women’s house) of Ondarroa will exhibit this work in the context of a series of workshops for the empowerment of women. Besides the exhibition, I will give a participatory workshop where women will build their own cameras and will choose what  to photograph, how to do it and how to exhibit the result. 2018.

Along with the editing house Banizu Nizuke I designed a can that contains the whole project. It was released canned and as well as the pictures, some other material is included in the can: texts related to the pictures, an engraving and a 7 inch vinyl in which you can listen to three musicians playing with instruments made out of cans.

All this resulted in a multidisciplinary show in which takes place the interaction of pictures, body expression, the reciting of some texts and the live performance of the three musicians.

I have been working on the project IMAGES OF FIRE between the years 2013 and 2017. During different trips to India I made a series of photographs using a camera built out of a machbox. Exhibitions:

This work has been selected for Gran Canaria Foto, that will take place in October of 2017. That will be the first time that the whole work is exhibited.

In June of 2017, the institutions AIR WRO and Etxepare selected my project about the river Odra for a residence that will take place during August and September of 2017 in Wroclaw, Poland. The river Odra configures the nature of the city and its inhabitants. I will photograph the city from the point of view of the river, treating the river as a living being that observes the city. I will give a participatory workshop in which the citizens will build their own cameras out of recycled containers and will later use them to photograph the river.

The work will be exhibited at the ´City and Culture´ international congress from 20 to 22 September 2017.

AECID, the International Cooperation Agency has recently approved roaming of the exhibition DIÁLOGOS SIN PALABRAS, in which I participate, by the Cultural Centers of Spain in Mexico, Montevideo, Lima and Santiago de Chile among others. Roaming is planned for 2018 and 2019. In ​​this collective exhibition participate photographers as: Isabel Muñoz, Bego Antón and Ouka Leele, among others.